Mike Tyson. What’s the first thing that comes to mind when you hear that name? 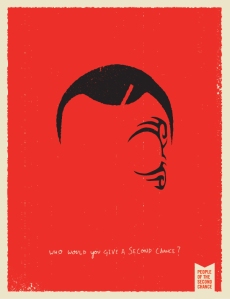 Come on, nobody drums to Phil Collins like Mike Tyson!

Seriously…what comes to mind? What about a second chance? Does he deserve one?

I have always found Mike Tyson to be an intriguing individual. He was a fantastic, fearless boxer. Nobody awed and frustrated pay-per-view customers like Tyson. He would lay to waste worthy opponents faster that you could blink. Yet, he has always been troubled. He seemed to have few boundaries in life, whether it be women, anger, or money. When he went to prison for rape in 1992, it seemed like the world had bought into the stereotype of who Mike Tyson had become.

I would venture to guess that few people know the “real Mike Tyson”. I mean the man that God made him to be. I would also suggest that maybe Mike himself no longer believes in that person either. So many people have written him off that it would be understandable to begin believing that person is a pipe dream or is lost forever.

There is always a second chance. There isn’t an individual alive that is too far gone or whose God-given identity is lost forever. Mike Tyson can still live in his God-created purpose. God still believes in Mike Tyson, the Mike Tyson He created. It is not too late.

This isn’t just something people say to hurting people to feel like they’ve helped someone. This is truth. It is real. No one is too far gone. No one is un-salvageable. Every life is sacred to God and built with a purpose that He is eager to see each person embrace.

If you find yourself in a situation where you believe you don’t deserve a second chance, DON’T BELIEVE IT!

Believing that you or someone else is beyond a second chance is believing that God isn’t capable of doing what He has said He will do. Don’t believe it. Never Beyond.

What do you think? Is Mike Tyson deserve a second chance? Why or why not?

This post is part of the blog series “Never Beyond.” People of the Second Chance has launched the Never Beyond Poster Series: 25 posters representing well known historical, current and fictional characters who are believed to have harmed society. This campaign consists of digital and print posters and the full collection will eventually be displayed as a touring art exhibit. The campaign draws out themes of forgiveness, grace and what a pathway to a second chance looks like.