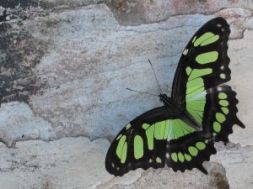 This afternoon, my three year old son, Peyton asked me, “Dad, did you know that Caterpillars turn into butterflies?” I think of that because I read in “In a Pit With a Lion on a Snowy Day,” that in 1960, an MIT meteorologist by the name of Edward Lorenz uncovered an interesting phenomenon while he was trying to perfect a computer program that simulated weather patterns. One day, in a rush, he decided to round off the number he had used in an earlier trial to .506. What would rounding to the nearest thousandth really change, he thought. After period of time away from his lab, he returned to find a drastic change in the weather conditions. He estimated the numerical difference between the original number and the rounded one, was the equivalent of a puff of wind created by a butterfly’s wing. A butterfly’s wing could drastically change wind currents enough to change weather conditions across the country. There you have the birth of the “butterfly effect.”

We often think that we have to make sure we get the “big decisions” in our lives right. Who are we supposed to marry? What am I supposed to do with my life? We think that if we get those big things right, our lives will be on the right track, right? We say, as the books suggest, “Don’t sweat the small stuff.”

I suggest that life is made up of so many more small movements than big moments. We become who we choose to be, one little decision at a time.
There are major leadership principles at work here. Mark Batterson says, “Small changes and small choices become magnified over time and have major consequences. Everything we change changes everything.” We think that the only thing that makes a difference is huge changes…coming to major crossroads.

Consider this, maybe we can impact more by doing less. Not status quo, but thinking smaller scale over a longer period of time. Just like the puff of wind from a butterfly’s wing can potentially change the weather pattern across the country, a small change in church culture can change a church culture dramatically. One of the things God has been challenging me with lately is this…
Even though on the surface it seems like my ability to affect change is minimal, I can’t underestimate what God is doing through the small influence I have. Caterpillars turn into butterflies and butterflies change the weather. My nonexistent influence can become a small influence, that can change the weather pattern of a church.